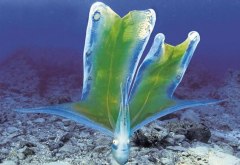 We all know octopuses/octopi/octopodes are pretty fricking awesome.  But the blanket octopi of the genus Tremoctopus (right) take their awesomeness to a whole new level-at least, the females do.

Have you ever heard of the Portuguese Man o’ War (Physalia) (left)?  For those of you who haven’t, they’re these pretty blue siphonophores (colonies of little jelly-like invertebrates) that travel the ocean with a balloon that they inflate and use to “sail” around.  However, don’t let its harmless, rather beautiful looks deceive you.  The Man o’ War delivers the most excruciating jellyfish sting known to man, and can even kill a human.  The jellyfish uses this sting to paralyze or kill its prey.

So what does the female blanket octopus do with this unique talent?  It rips off the Man o’ War’s tentacles, and flails them around like a whip!

What about the male blanket octopus, you ask?  He’s the size of a walnut (right) and has no interesting qualities whatsoever.  Unfortunately for him, his emasculation doesn’t stop there-when it’s time to mate, the male blanket octopus fills its arm with sperm, tears his own appendage off, and gives it to the female.  Then, he dies.  Talk about getting the short end of the stick.